The Fine Art of Negotiation 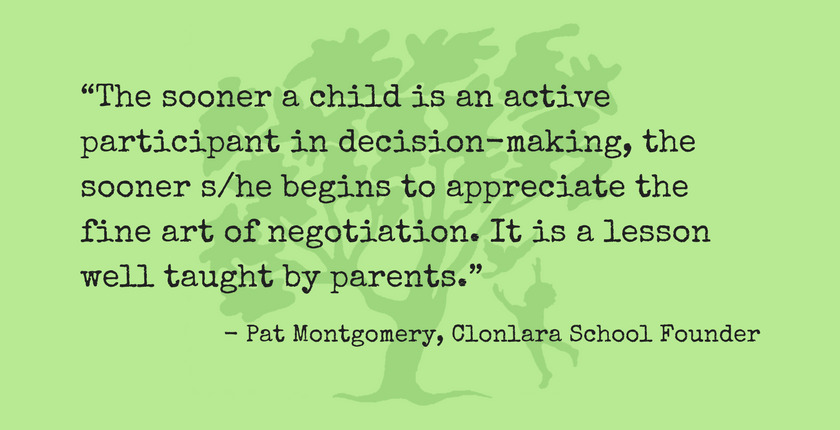 Editor’s Note: From time to time, we’ll “look back” through our archives to share articles that are as relevant today as when they were printed. In this piece that was originally published in the April 2003 issue of The Learning Edge, Clonlara’s founder discusses the importance of involving children in decision-making and the lessons learned through negotiation.

Many years ago when I was a graduate student at Wayne State University in Detroit, I had occasion to visit the home of a professor, along with about 15 other members of the class. Most of us were schoolteachers or administrators. The professor’s 10-year-old son, an only child, was excited to interact with so many attentive adults. As the clock ticked further toward 9:00 p.m., the professor (I’ll call him Mike) reminded the boy (I’ll call him Kevin) that “tomorrow is a school day” and it was time to get ready for bed. A disappointed Kevin responded to his father that he didn’t want to go to bed and miss the excitement of the conversation and hubbub. He was having great fun. It was a potential setup for a showdown of wills.

Mike calmly acknowledged that a party of this sort was inviting and hard to leave. “How about going up and getting your pajamas on and teeth brushed and then coming back down for 15 minutes more? Mike suggested.

“But 15 minutes isn’t a very long time,” Kevin replied. “I’d rather stay up for an hour more.” “Okay, let’s make a deal,” replied his father. “You go up and get ready and come back down to join the party for 35 minutes minus the time it took to get ready. “Okay,” said Kevin, and off he went. All of this interaction took place within earshot of three or four of us guests. I was very glad that I got to witness it.

Negotiation. What a useful art. Where will a person learn to negotiate if it isn’t at home? Some parents feel that sharing power to decide matters with a child is abandoning their role. They harbor an underlying fear, assuming that their authority may be frittered away somehow by making deals with youngsters.

I have found that negotiating teaches a child that both parties to a decision come away with a better appreciation of honest human interaction when they have participated in negotiating a conclusion to an issue that might otherwise become a problem. It was obvious to me that Mike and Kevin had done this sort of thing on other occasions. Youngsters, like adults, take baby steps when they launch into new territory like this. They are led to understand that, using compromise, both parties can come away from a decision feeling as though they got a fair shake. It is so much easier to abide by the decision when both have had a hand in agreeing to it. This puts the onus of being a person of his/her word on both parties. Honor hangs in the balance.

In the adult world, people function more humanely together when they take time to understand the other person’s point of view. Hard feelings and skirmishes and even hostility result from one person’s issuing commands and expecting others to fall in line without question. Heaven knows, this is abundantly clear on a global level.

The sooner a child is an active participant in decision-making, the sooner s/he begins to appreciate the fine art of negotiation. It is a lesson well taught by parents.

What do you think about Mike and Kevin’s “deal” and the idea of negotiating with children? Please share your thoughts below.