A Science Lesson to Remember 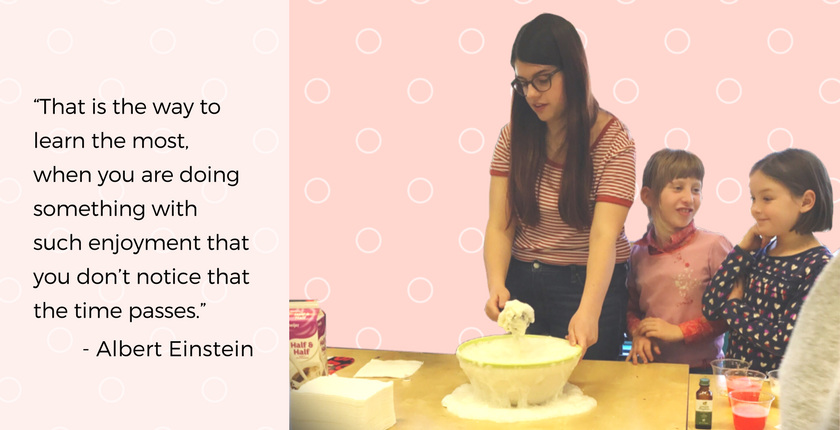 As a student who went through traditional schooling for the majority of my life, having the ability to experience Clonlara School’s hands-on learning style has opened my eyes to the many ways children of all ages can be educated. In a recent lesson, my fellow campus students and I were able to apply Clonlara’s hands-on style when learning the science behind solid carbon dioxide, also known as dry ice, through a variety of tests and experiments.

After discussing our hypotheses, the first test we performed was to see what reaction would occur when water was added to solid carbon dioxide. Our results showed that the reaction creates a fog-like product that pours out of its container. This fog, as explained to us by our teacher, Ben Bellamy, is actually CO2 gas that sublimates at a faster rate when dry ice is submerged in the water, and the reason it pours over the top and then down the cup is because it has a higher density than the surrounding air.

The second test we conducted allowed us more freedom to add substances of our choice to our base of dry ice and water. The substance, or reactant, we chose was foaming soap. After having a discussion about what we believed the soap would do, we added around one squirt of it to our cups and waited. Almost instantly, the fog began being trapped by bubbles that were slightly different in each cup, which Ben explained was due to many factors, including the amount of soap added, the amount of water initially in the cup, the amount of dry ice in the cup, how much of the dry ice had sublimated away, and how much air was being added to the bubbles (such as kids blowing on their cups).

The last and probably most exciting test for us was making carbonated ice cream using dry ice. Through the process of shredding the dry ice and mixing it with half and half, sugar, and vanilla, our group worked together to apply the information we learned in the previous tests to create a rewarding treat!

As these experiments show, science can be a lot of fun when applied in hands-on way. What are some examples of how you make learning science more memorable? Please share your ideas with us.