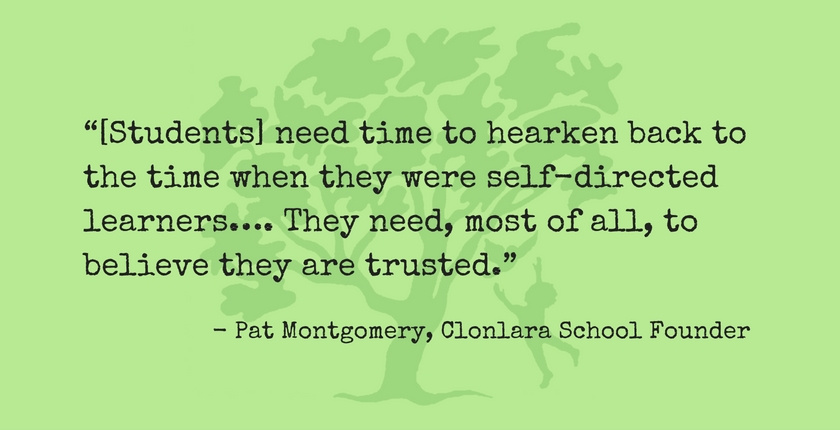 Editor’s Note: From time to time, we’ll “look back” through our archives to share articles that are as relevant today as when they were printed. In this piece that was originally published in the Winter 2013 issue of The Learning Edge, Clonlara’s founder discusses the importance of deschooling time.

Switching from institutional schooling to home educating can be challenging for all parties concerned: parent, student, and other family members. I liken it in my own past experience to having an older student, say a teenager, enroll in Clonlara School after having spent years in conventional school. Chris comes immediately to mind.

He was 13 years old and had attended a private Christian academy since grade one, but he now refused to return, and his parents had had their fill of trying to work with the school. He spent the customary trial week at Clonlara and then signed on for the new school year. Our usual approach with new students was to let them experiences the various choices that all Clonlara students had—which class to attend, what activities to engage in, which teachers to communicate most with, etc. The maxim was, do as you choose as long as it is not harmful to yourself or another.

Chris spent most of the day in the treehouse with the younger kids. He helped them hammer together another level. One day I called to him from the path below. He reluctantly came down, and from his facial expression and his attitude it was clear to me that he thought I was going to censure him. His body language virtually screamed: I’m doing what I want and you can’t stop me.

“You said we could make our own choices and I choose to do nothing,” he replied.

“Tell me what doing nothing looks like,” I said.

In time he realized that I was not questioning his choice, that I had meant what I said, and that I was really only checking in with him. We ended up laughing together. Years later, he told me that he just knew that I had come out to order him out of the treehouse and into classes. Then we laughed even harder!

Youngsters who have had confining experiences or who have been treated as though their opinions were not worth much, or perhaps were never even asked for an opinion, need time to relax. Ivan Illich called it deschooling. They need time to hearken back to the time when they were self-directed learners—up until they began attending school where adults are the ones who write the rules and determine the order of their days. They need, most of all, to believe they are trusted. They need adults who will talk TO them, not AT them. It takes time. It takes talking together, consulting.

But what if a youngster just sleeps or holes herself up in her room and doesn’t connect with her parent in the home school situation? Or one who watches TV or plays with today’s electronic thingamajigs?

Take deschooling time. Talk to them. Talk to them the way you talk to a friend who is 21 years of age or older. They will come to know that you are not passing judgment, that you are on their side, that together you can get through this period, that you are both members of the family, both wanting the best for them. Honestly.

Do you have any questions about deschooling or an experience to share? Please tell us in the comments below.