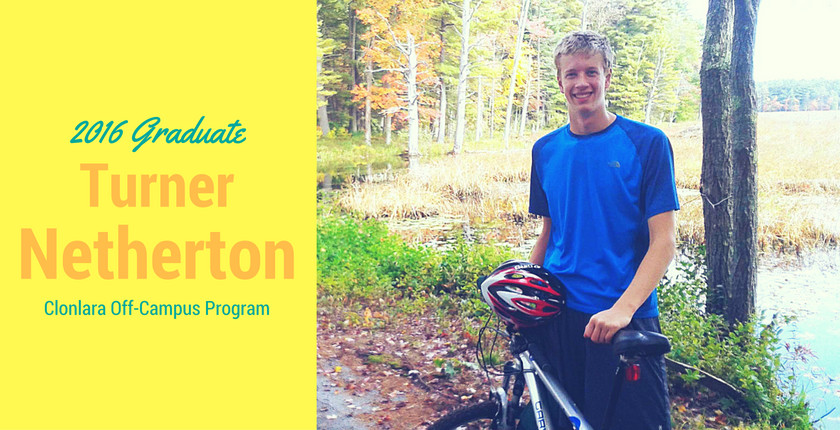 In an article this summer, The Lowell Sun profiled Turner Netherton’s experiences as a homeschooler, rower, and recent recruit of the University of Wisconsin’s crew team. As with many Clonlara students who have taken charge of their education, though, there’s more of Turner’s story to be told, and we’re glad for the chance to share a few additional highlights from his time in our Off-Campus Program.

Clonlara’s mission is to provide programs and services that recognize and support a learner’s curiosity, strengths, interests, and talents as the foundation of his or her educational experience; and for Turner, this meant using the Off-Campus Program to design a rigorous high school education around the pursuit of his personal passions and goals.

Turner’s greatest passion is rowing. He says he values the way the sport “physically pushes me farther than I thought possible…and gives me a deep sense of community.” Turner is also passionate about learning to speak Norwegian and made the language a part of his studies before traveling to Norway this summer to spend time with his extended family there.

As an off-campus student, Turner’s academic pursuits were varied—from online Honors and community college courses (with recognition in a campus contest for his research project on language acquisition) to self-designed courses that allowed him to challenge himself to explore a variety of subjects in deep and creative ways. In addition, Turner invested extensive amounts of time and energy into social justice causes he believes in, such as his church’s intergenerational task force for incarceration issues, which he founded because he was concerned about injustice in the U.S. prison system. He was also a devoted supporter of the Prison Book Program and his local library system, and he served as a mentor for the younger members of his Mock Trial Club. To expand upon some of his other interests, Turner interned in a university biomedical lab and volunteered at a local art gallery.

When discussing his learning experiences, Turner is always articulate and insightful. Reflecting on his personal growth as a writer, he said:

In 5th grade, my writing was poorly organized and lacked development. I would struggle to string together a few sentences without some sort of grammatical mistake, logical fallacy, or gaping hole in my argument. But over the course of about five years, I’ve turned writing into one of my strongest subjects. I overcame my struggle with writing the only way I know how: Hard work, time, and help… I pride myself on how hard I work whether it is with rowing, school, or some extra-curricular. Dedication of time and hard work are the best ways to ensure a job gets done. When things get difficult in rowing or school, I just keep trying.

Turner’s perseverance and discipline, combined with his positivity and strong sense of humor, will serve him well on the crew team, in the classroom, and in life. We are excited for him and look forward to the next chapter of his story as he begins college this year.

Do you have an update to share? Leave us a comment below or just get in touch. We’d love to hear from you!